The French cities and places to discover in France are becoming a wonder that attracts millions of tourists every year. In addition, there are some surprising sights in France that arouse the curiosity of everyone. But France is also one of the most cultural countries in the world. That’s why, in today’s article, we are going to discover the culture of France, because it allows us to have another look at France and its inhabitants.

All the cultural information about France is incredible. Specifically, we will talk about the culture and customs of France, which are a priceless treasure. From a historical point of view, the French Revolution contributed to the pursuit of freedom and human rights, but other aspects such as gastronomy and art have also influenced the existence of cultural tourism in France.

Furthermore, we cannot forget that France has given humanity a great cultural heritage: the Declaration of the Rights of Man and of the Citizen. It has also contributed to forge cultural and political manifestations in Europe and all over the world, which are based on Liberty, Equality, Fraternity (liberté, égalité, fraternité). So that you don’t miss any details about the cultural environment of France, keep reading!

The typical cuisine of France is so exceptional that it has been classified as intangible heritage of humanity by UNESCO since 2010. It is characterized by great refinement and the use of fresh ingredients. However, each region has its own particularities.

In this sense, in the east of the country, we find dishes where the use of sausages and all kinds of meat predominate. In the northwest, butter, cream and apple are used in the preparations. The cuisine of southeastern France tends to be influenced by Italian cuisine, where the use of aromatic herbs, tomatoes and olives predominates. In the north of France, there is a gastronomy with some roots in Belgian cuisine, where pork, potatoes and beans are used.

There are dishes that you can’t help but eat when you visit France. This fusion of flavors is essential to understand what French culture is all about. Among the different preparations are croissants and crêpes, which have become popular in many countries. You should also try onion soup, quiche lorraine, baguette and gratin dauphinois. 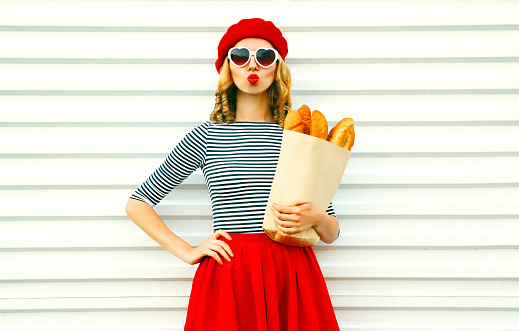 Dress in French culture is very elegant, in fact, the term “haute couture” is associated with French fashion. Clothing that gives a sense of magnificence has been present in all historical periods of the country. Clothing throughout the history and culture of France has had an excess of detail, with baroque and sophisticated airs.

For men, the suits are usually numerous, with ornaments and usually have details in blue. Women traditionally wore dresses fitted at the waist, long skirts and corsets, a great icon of French women’s fashion.

Now there are other generalities about accessories that are also regularly worn by men and women. Thus, it is common to see people with scarves, gloves, berets, hats and coats.

How are the French? Lovers of freedom in all its expressions, they tend to have a high sense of patriotism and like to do activities outside their homes or in the open air. The French are not afraid to comment on their thoughts and visions with others. They also have a type of humor that is considered intelligent. They also have good manners.

There is a stereotype about the French that they are moody, distinguished, ambitious and proud. However, it all depends on the region. However, it is true that there is a certain group of French people who are conservative, attached to traditional values and have attitudes that can be embarrassing for tourists and migrants. For example, some people love French as a language so much that they do not tolerate a foreigner mispronouncing certain words or having too much of an accent.

Interested in traveling to this beautiful country? Let us know your opinions. And if you want to learn more on the French culture, come back to read the second part of our article.