What’s your favourite French pastry? The classic croissant or something sweeter with a little cream? France is universally renowned for its delightful pastries and so whether you’ve got a trip on the horizon or want to know what to look out for locally, read our guide covering all the favorites.

A true show-stopping centerpiece, croquembouche consists of choux pastry profiteroles which are filled with custard cream and assembled into a cone-shaped tower, glued together with caramel. The final dessert is elaborately decorated with spun sugar, sugar-coated almonds, fondant flowers, fruit, or even macarons.

Creamy, flaky, and delicate, this French dessert can be literally translated as a thousand leaves. Millefeuilles consist of thin layers of pastry and fillings topped with cocoa, almond, or vanilla icing. Fillings may include jam, whipped cream, custard, puréed fruit, or nut paste.

With a shape resembling that of a bicycle wheel, Paris-Brest is made with a ring of pâte à choux – a puffy hollow pastry traditionally flavored with fleur de sel, topped with flaked almonds, and baked until golden brown.

The airy pastry ring is then sliced horizontally and filled with a rich hazelnut and almond mousseline praliné cream, while the upper crust is generously dusted with powdered sugar. 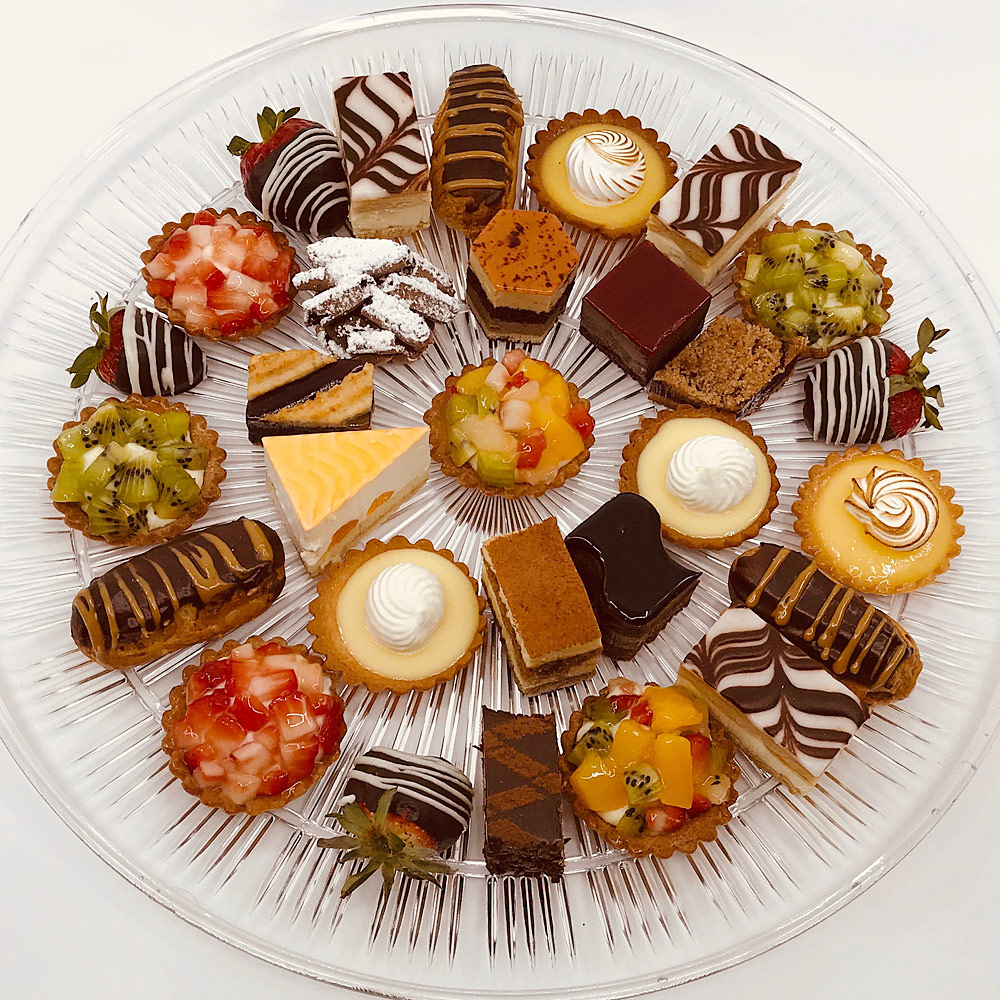 These squares of deep-fried pastry dough are sprinkled with powdered sugar and are traditionally served hot. The dish hails from France, and French settlers brought it to the Acadia region of Canada in the 17th century. Many of the Acadians later moved to Louisiana, and they brought their culinary traditions with them.

Pain au chocolat is a French viennoiserie roll made with a combination of rectangular, yeast-leavened dough and a few chocolate sticks or chocolate ganache. The filled dough is rolled, baked, then served, ideally while still hot or warm. This flaky pastry can be bought at numerous French bakeries and supermarkets.

These chocolate-covered puff pastries are filled with either whipped cream, custard, pastry cream, or vanilla ice cream. Many theories exist about the origin of this dessert, but the most likely one traces it back to the 13th century, when the chefs who first created the puff pastry in France and southern Germany began filling them with savory cheese mixtures and herbs.

Sweet versions of the dish followed, and by the 17th century, the small pastries were referred to as choux (lit. cabbage), because the pastries were visually reminiscent of heads of cabbage. By the mid-19th century, the puffs had become known as profiteroles in France and England – they were decorated to resemble swans or pyramids, and were often served with dessert wine, tea, or coffee.

This baked specialty is a French type of viennoiserie, a cross between a pastry and a bread, with a high butter, milk, and egg content that makes it rich, soft, and flaky. It has been enjoyed for centuries both as a delicacy and as a status symbol.

These elongated pastries with an appealing glaze, a crispy exterior, a soft doughy interior, and a sweet, creamy center originated in France at the turn of the 20th century. Most food historians believe they were invented by Marie-Antoine Carême, a famous French chef. Éclairs (French for lightning) are believed to have received their name because of how the light would reflect off of them after a coating of confectioner’s glaze.

These flaky, golden-colored, crescent-shaped pastries are best made with pure butter and a slightly sweet yeast dough. If made properly, the yellow-white interior should be just the slightest bit elastic when pulled from the center, ready to be covered with a pad of butter or some fresh jam.

Experts agree that the croissant was heavily influenced by Austrian kipfels. This pastry originated in 1683 as a celebration of the Austrian victory over the Ottoman Empire, its shape supposedly mimicking the crescent moon found on the Turkish flag.

If you’re looking for genuine French pastries while strolling down the busy streets of Toronto, then make sure to pop round Nord Lyon on 665 Queen Street. You definitely won’t regret it.