5 Archaeological Sites That Will Leave You in Awe

1. Angkor – Cambodia
Angkor was the ancient royal capital of Cambodia. Because of its size (about a thousand archaeological remains), its location (in the middle of a dense jungle), and the sculptural and constructive quality of its temples, Angkor can be considered one of the wonders of antiquity. With eight centuries of Indochinese history sculpted in columns, stupas, friezes, and reliefs, Angkor is one place where one must go on a trip once in a lifetime.

For more than three centuries, Ayutthaya was the capital of the kingdom of Siam, the precursor of current Thailand. Its ruins are today located about 75 kilometers upstream from Bangkok, on the Chao Phraya River.

Between the 15th and 18th centuries, Ayutthaya became one of the world’s most populous and influential cities. By the mid-17th century, it had a population of one million, twice that of London at the same time. And the descriptions of the Western travelers who visited it at that time only praise the splendor of the imperial capital. It is said that foreign traders who traveled up the river knew they were coming because the sun’s glare on the temples and palaces could be seen from five kilometers away. The Burmese seized, sacked, and destroyed it in 1767.

3. Bagan – Myanmar (Burma)
There are few moments in a traveler’s life as awe-inspiring as seeing the sunset over the thousands of stupas, pagodas, and temples of Bagan, Myanmar’s most significant archaeological site.

Bagan is the highlight of any visit to Myanmar (formerly called Burma). For some 230 years, between the 11th and 12th centuries, Bagan was the capital of the most powerful kingdom in present-day Burma. The temples there are very scattered and should be visited by bicycle (not recommended in the dry season, from February to May; it’s hot as hell, and even your ideas are cooked), by electric scooter or cab. It is easy to get around on your own with the guide map provided in the hotels. 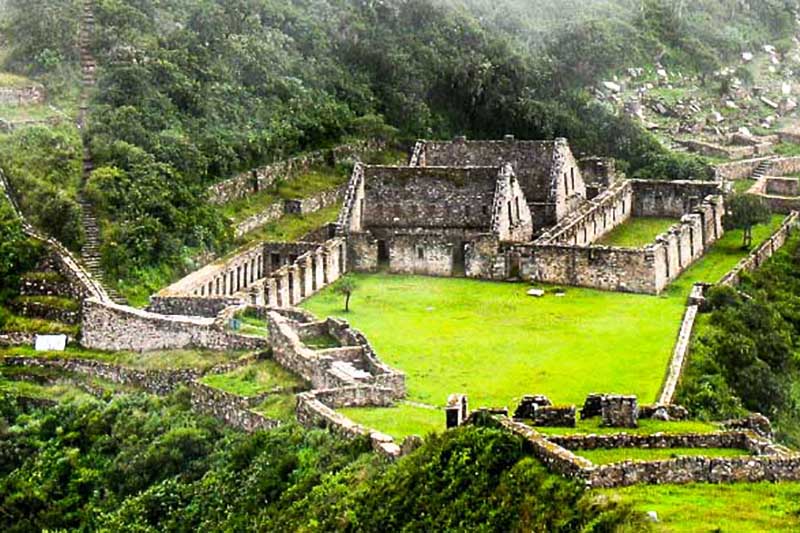 Peru is home to several spectacular citadels like Machu Picchu. However, if some of them are not as famous as Machu Picchu, they are still worth visiting. For example, Choqueqirao, an Inca construction that rises in another jungle mountain in the department of Cusco, 169 kilometers from the capital, could have been a more important cultural and religious center than Machu Picchu, only it is still less excavated, accessible, and promoted.

Choquequirao has been preserved from mass tourism because there is no road to reach it; the only way is by foot or mule, which allows covering 63 kilometers (round trip) from the village of Cachora, a colonial village of adobe houses located in the basin of the Apurimac River. This restrained accessibility makes the visit to Choquequirao a real adventure, reserved for travelers willing to get off the beaten track.

5. Pompeii – Italy
Pompeii is famous for its historical curiosity (it is not a city that was abandoned like the others, but an eruption suddenly buried it), and for the quality and quantity of remains and information, it has bequeathed to it us from that period.

The explosion of the volcano Etna was a tragedy for the citizens of Pompeii, but a blessing for historians who have had the opportunity to observe an accurate picture of what was the daily life in the empire in the first century stopped and shaped by the solidified ashes. Plan at least a full day to see and understand the vast heritage uncovered at Pompeii.

Have you ever visited another breathtaking archaeological site? Share your experience with us in the comment section below!