Visiting Belize: a Paradise for Those Who Love Water Activities

Not quite Latin American, but not quite Caribbean either, Belize has a bit of both worlds. It is home to a great mix of cultures, incredible ocean floors, and jungles that hide Mayan pyramids far less visited than those in neighboring countries.

Belize is a somewhat rustic destination, and great for travelers who want to feel that there are still corners of the world to discover. After Australia’s, its coral reef is the second largest in the world, a true underwater paradise.

Its jungle gathers a massive network of national parks and natural reserves, its Mayan sites have nothing to envy to Mexicans, Guatemalans, or Hondurans. The growing tourist industry has developed all kinds of adventure proposals in nature, ranging from zip-lining to the discovery of kilometer-long caves.

Cayo Ambergris (Ambergris Caye) is an island in Belize where about 15,000 people live, with the majority living in San Pedro. This is the island that Madonna made famous in her song “La isla bonita”.

Ambergris Caye is the typical dream place, where shorts and flip-flops are the typical attire, golf carts are the mode of transportation, and the main activity is relaxing on the fantastic white-sand beaches.

The island is a popular destination for tourists looking for sun and activities on the stunning Pacific Ocean. This magical place in fact attracts visitors that enjoy snorkeling, diving, deep-sea fishing, and sailing activities.

Caye Caulker is a small coral island in the Caribbean Sea and is accessible by high-speed water cab or a light plane. Located a short distance from Ambergris Caye, the small island is only 8 km long and less than 2 km wide.

In recent years, the island has become a popular attraction in Belize for backpackers and other tourists due to the low prices, laid-back atmosphere, and abundance of restaurants and bars. 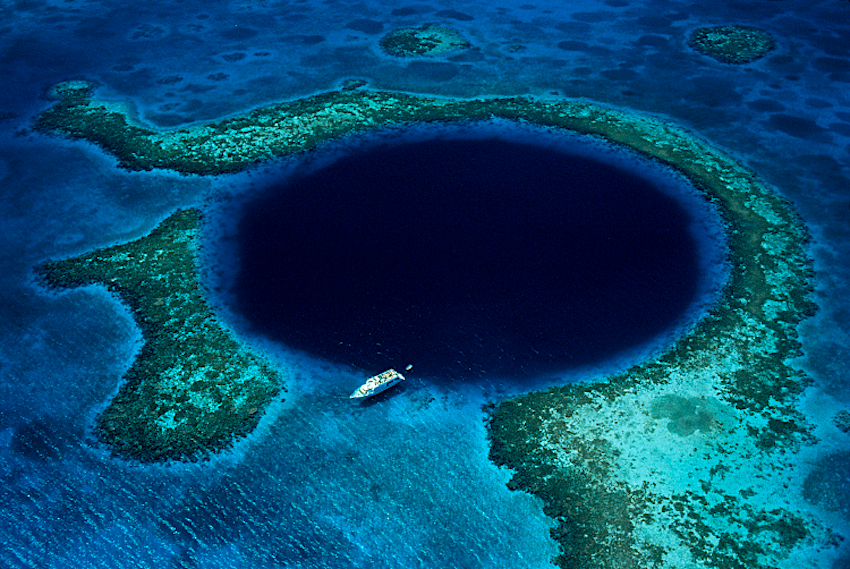 The Great Blue Hole is a perfect circle in the sea, more than 300 meters wide and 124 meters deep, in Belize. The site, which was first visited by Jaques Costeau, attracts a great diversity of marine life.

Limestone formations shape the walls of this huge hole under water. The deeper you dive into the Great Blue Hole, the clearer the water and the more breathtaking the landscape.

El Caracol is a Mayan archaeological site in Belize. El Caracol is located 40 kilometers from another major Mayan site – Xunantunich. In history there are reports of wars between the civilizations of El Caracol and Tikal, in Guatemala.

Perched high on the Vaca plateau, El Caracol is the largest archaeological site in Belize. This was a Mayan city, with an estimated population at the time of around 150,000 people – more than double what Belize City now has.

The ruins of this Mayan city are embedded in the jungles of the Chiquibul National Park, near the border with Guatemala. The warriors of El Caracol were known for their military daring, defeating the powerful cities of Tikal and Naranjo, both in the Petén region of Guatemala. Today, visitors can see the stone carved from the altar depicting these achievements.

Xunantunich is one of the main sites of the ancient Mayan civilization, in Belize, on the border with Guatemala. El Castillo is the second tallest structure in Belize (after the temple of El Caracol), about 40 meters high.

The Mayan ruins at Xunantunich are located at the top of a ravine above the Mopan River, near San Ignacio, just 1 km from the border with Guatemala and 130 km from Belize City. Xunantunich occupies an area of ​​2.6 km2 and consists of a series of six squares surrounded by more than 20 temples and palaces.

If you’ve ever been to Belize, don’t forget to share your experience there in the comments below.

« Discover Ottawa with Those Must-Sees » Travel Tips for Gay Travelers