Incredible Places to Visit in Albania

Albania is part of the Balkans, an area that reminds many of the bloody war that plagued several countries in the 1990s. Albania did not suffer so much from the effects of the war, and thanks to that, it has preserved all its heritage. Despite its small size, Albania offers visitors idyllic beaches, Roman sites, picturesque villages, exuberant nature, and exquisite cuisine, and all this at a reasonable price! Here are some of the most charming places to discover in Albania!

We started the list with the country’s capital city, which, although it does not have much reputation, can pleasantly surprise you! You will be welcomed by a town with an eye for modernity and progress, with lively cafes and innovative restaurants. Gone are the dictator Hoxha’s days who pitted Albania against the Western powers and plunged the country into a dark period of almost 40 years. There are still some remnants of those times in Tirana, such as an anti-nuclear bunker converted into a museum or the pharaonic mausoleum of Hoxha, in front of which they built a pyramid.

Besides the parks of the capital, you can visit iconic places such as the Xhamia e Namasgjase mosque or the National Museum, which houses interesting exhibitions. If you’re looking for the liveliest neighborhood, don’t miss the bustling Blloku district, with countless cafes and restaurants with terraces to enjoy the cuisine or have a quiet drink. If you still have time for an outing, be sure to visit the Dajti National Park, just 25 km from the capital, with impressive mountain landscapes, lakes, and abundant native fauna. 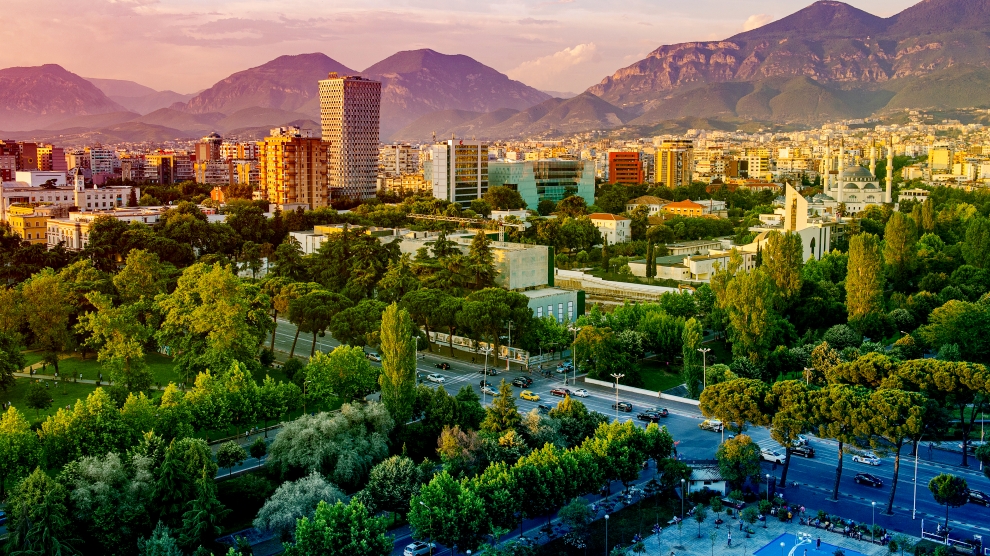 The footprint of Roman civilization has been imprinted on this majestic Roman site. The town was built to honor the god Apollo, and by the time of the Roman Empire, it had become a vital city on a commercial level. The city succumbed to an earthquake, altering the river’s course, turning the area into a swamp. The central core of the site is organized around the agora. This is where you can see the spectacular Agonothètes, the city’s administration, and meetings’ main center.

The Odeon is an ancient theater where the remains of other old buildings are organized around it. In another area is another larger ancient theater. A visit to the Apollonia Museum, where statues, vessels, and other objects found in excavations are displayed, completes the architectural ensemble.

This scenic town is a World Heritage Site for its historic center and the castle that overpowers it from the heights. It is Albania’s oldest city, Romans, Byzantines, Slavs, Bulgarians, and Ottomans have traversed it over more than 2,000 years of history.

Berat is renowned as the city of a thousand windows because of the endless windows that watch over the visitor at all times. As a result of the 5 centuries of Ottoman rule, the city’s typical houses have retained a classic Ottoman structure, giving it a very distinctive character. Berat is nestled between huge mountains and is crossed by the Osum River. Above the city rises majestically the castle, witness to countless battles and from which there are precious snapshots of the city. The main attraction for tourism in Albania is the beaches and the famous Albanian coastline. This coastal strip stretching from Dhermi to Lukove over more than 40 km offers visitors the opportunity to enjoy the Ionian Sea’s crystal clear waters. Through the winding literal strip of sand are hidden of the highest quality and turquoise hues that will conquer you at first sight!

Some have already gained so much fame and recognition that they are packed with tourists during the summer months. On the other hand, others are kept more restrained and allow you to enjoy endless days of sun and beach in peace.

Have you ever been to any of these places? Share your experiences with us in the comments below!