Tourism in Mexico is very diverse, as it has beaches, large mountain ranges, beautiful cities, magical little towns, and archaeological sites full of history. In this case, we would like to talk about an area that you cannot miss for anything in the world – Teotihuacán! Located just 49 km from Mexico City, Teotihuacán is one of the most important archaeological sites in Mesoamerica. It comes from the Aztec language, which means place”the birthplace of the gods.” The name was baptized in approximately the 8th century AD when these ruins of civilization before them were found.

On December 11, 1987, this archaeological zone was named a World Heritage Site by the United Nations Organization for Education, Science and Culture, better known as UNESCO. It is one of the most visited archaeological sites globally, and it is very curious, but the information about its first settlers is almost nil. Perhaps this mystery makes this place so attractive and space where many come to recharge their energy. Let us witness all the hidden history and discover the magic that Teotihuacán has to offer…The City of the Gods.

Geology of the Teotihuacán Valley 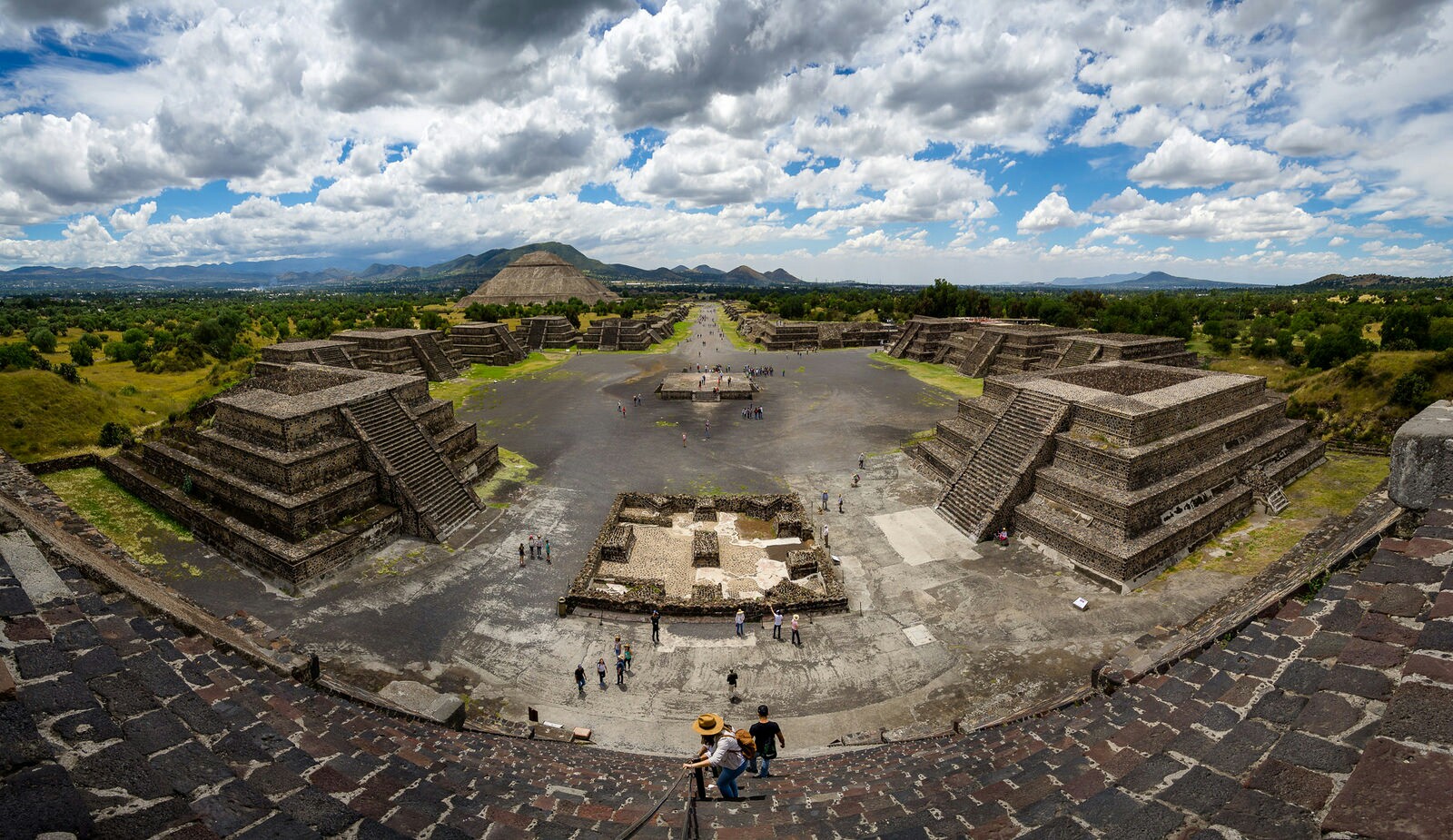 The Teotihuacán valley has more than 14 thousand km2 of surface, and its altitude ranges from 2,240 to 3,200 meters above sea level. The valley is surrounded by the Malinalco, Gordo, and Colorado hills. To the south, the Sierra de Patlachique, and to the north is Otumba, a “magical town” of Edo. from Mexico. To the southwest of the valley is located the Chiconautla hill near the San Juan River’s old mouth. To the west, the Tonalá hill marks the separation between the Teotihuacán valley and the alluvial plain where Tecámac and Zumpango meet.

Teotihuacán has in its entirety more than 20 km2, but we recommend that you enter through Gate 1 and start the entire route through the Calzada de Los Muertos, which is the main artery of the enclosure. Next, we recommend the points that you should visit during your visit to do it walking at your own time and calm. 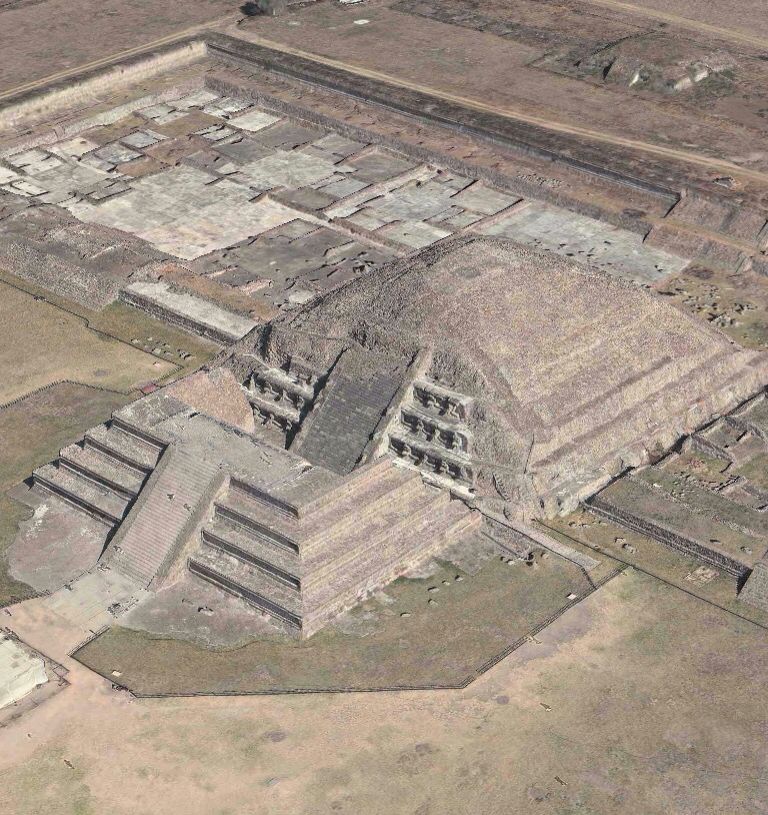 Entering through door 1, the first structure you find is La Ciudadela, from where you can see the 15 pyramids of Teotihuacán. It is an architectural complex with an area of ​​160,000 m2. The main Pyramid of La Ciudadela is the Temple of Quetzalcóatl, which is believed to have represented one of the city’s administrative centers. You will also find the steps of the Temple of Quetzalcóatl with incredible carvings, which you must appreciate.

#2. Temple of the Feathered Serpent (Quetzalcóatl) 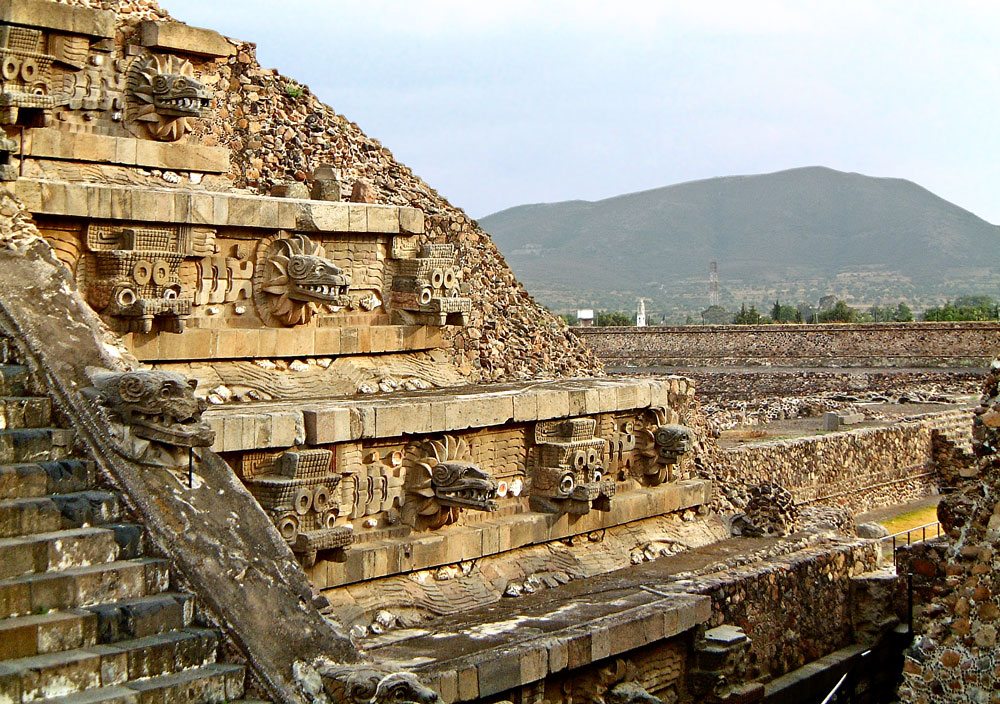 It is the third-largest monument in Teotihuacán. It has one of the most beautiful and intricate decorations of pre-Hispanic times, as it had seven bodies decorated with unusual opulence. The sinuous bodies of feathered serpents swimming among shells and snails were carved on its rafters, slopes, and boards. The boards’ snakes carry a headdress between the head and the rattlesnake, painted in intense colors. The Calzada de Los Muertos is a wide path that crossed the city from north to south. This 2 km walkway is 40 meters wide and begins on the esplanade in front of the Pyramid of the Moon. Its southern end extends until after the Citadel. This southern route has not yet been explored, but it is estimated that its length exceeds 4 km. Along this road are the most important constructions in the area such as the two pyramids, the Sun and the Moon, the Quetzalpapálotl Complex, with its Palace, the Patio de Los Jaguares and the Substructure of the Feathered Snails; The Citadel, with the Temple of Quetzalcóatl, the Complex of the Street of the Dead, the temple of the Mythological Animals and the old housing complexes of elite category in Aztec society: Yayahuala, Tetitla, Xala, and Zacuala.

“The Pyramid of the Sun” is the largest of the Teotihuacán constructions and is second in all Mesoamerica, behind the Great Pyramid of Cholula. It is located to the west of the Calzada de Los Muertos, and due to its impressive dimensions, it can be seen from several kilometers away, and its size even impacts from the moment you cross the entrance. “The Pyramid of the Sun” is 63 meters high and has a square base of 225 meters on each side, which has made it compared to the Egyptian Pyramid of Cheops. The current structure is the same as the original 20th-century restoration, which ended with 238 steps to its top. Although its exact use has not been deciphered, it is believed that it was the dedicated structure for realizing different offerings and sacrifices. The best way to get to know this Pyramid is by taking the strength to climb its 238 steps and enjoy the spectacular view at the top. So if you get some vertigo, go up calmly and with a good companion.